skip to main | skip to sidebar

Moved to other pastures

Most of my writing has been moved to www.relth.org
Posted by T Relth at 10:00 AM No comments:

I have written elsewhere about my admiration for Frank Gehry. In the documentary by Sydney Pollack, it opens with drawings (sqiggles) by Mr. Gehry, while Frank in the underlying audio track says "You think starting is hard? You bet it is."

So, I poke and prod my students but "frank" truth, I have the same reluctance to place that first stroke on that white canvas. So, the Saturday before last, I took out the stuff: the l'huille d'lin (linseed oil) and colored oil paints, and my bigger brushes and I started.

The truth be known, I could not resist and at the same time I had no idea what I was doing, just using everything I know and everything I don't. 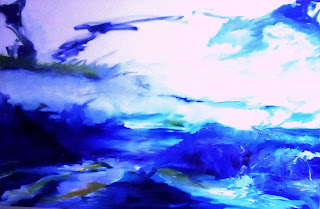 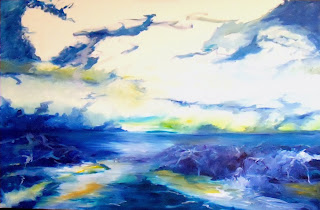 and tonight after a four day rest "step 3".


I am sure that tomorrow I will regret some of my spastic work, but I will remember that it is just "goo" on a "surface" 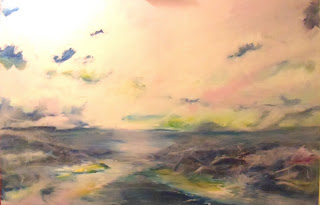 May 18, 2009
We have nearly completed a "do it yourself" Art history independent research assignment with all four classes of my senior high students, 9 through 12 grade.

Until this project we have: studied and produced still life drawings on canson paper with dry media using Cezanne as a reference, drawn life drawing proportion, expression and exaggeration based upon the work of Rico Lebrun and Picasso’s Guernica, painted surrealist paintings based upon Magritte and others, discussed Dada and its influence on the discussion of art of idea, produced a meter x 0.8 meter photorealism canvas; now it was time for a change of work method; a “DIY” research paper.

The students start with an artist or movement that they think they could love and are instructed to research the web, the library and ebsco, a library source for print articles that the school owns, and are asked to write a thesis statement. The idea is something like this: Artist or movement "A" influenced Artist or movement "B" in such a way that "C". Once agreed upon the student builds a bubble diagram or outline.

The assignment promises that if they will dig in, work and do the process (resulting in a 10 page paper and PowerPoint with at least 10 reproductions/examples of each "A" and "B" that they will be rewarded with a benchmark art history paper and a passion for that artist or artists that will change their own life, perceptions and work practices. The project started March 5th and I supervised all four senior higher classes (42 students) to look and read seek and find, record and think for eight weeks.

Some of the presentations and some of the papers are simply put; amazing. Some of the papers were weak but so far the presentations have proved well conceived and some are even moving. Students have pressed and have found incredible examples of influence. The best originals included Hokusai on Monet, Caravaggio in relation to Rembrandt, Christian Audigier and the Zeis School, Hogarth and Thomas Frye, Cubism on Abstract Art using four key artists, Pininfarina on Frank Stephenson auto designer etc.

One student (completely plagiarized) wrote:
Warhol was fascinated by Hollywood, fashion and style and like his contemporaries Jasper Johns and Robert Rauschenberg, he borrowed images from popular culture for his artwork. He was also influenced by Marcel Duchamp, who took ordinary objects and displayed them as "readymade" works of art.
And added the original statement …Andy Warhol turned himself into a great influencer himself.

Regardless of questionable practices…every single student has confessed an overwhelming love (or hate) for the artist. One student came in and passionately told me "Mister, I am in love with a dead guy...Renior is a hero, he never gave up"

This next is from my youngest student who is also least fluent in English. She came to me about 2 weeks ago to talk and I determined that she had done very little. "I hate Picasso" she said. "Then, why did you pick Picasso" I asked. "Because I thought he would be easy" she snapped. We continued to explore this and I found that she had looked a tremedious amount of his work ….looked at but not “read about”. I have since discovered from her ESL teacher that her reading level in English is about grade 3.

Leslie and I own a copy of "Life with Picasso" by Françoise Gilot, Picasso's third "wife". I asked this student who again please note, is first-language-French-speaking if she would read this book. She agreed and is now nearly finished. While I am not sure about comprehension, I note that she is extremely zealous about her discoveries in the work of Picasso. I have given her a special contract to extend her deadline to June 1st, and asked her ESL teacher-coach to join me in keeping her on task.

Last Thursday, she presented her PowerPoint. She had absolutely the best examples of any student, depicting influences (and the direct appropriation of images) of Henri Matisse, Georges Braque, Paul Cézanne, Rousseau and African art upon the work of Picasso and specifically on Les Demoiselles d'Avignon (The Young Ladies of Avignon) a large oil painting from 1907 by Picasso.

________
Picasso, is a huge artist, everybody knows Picasso, he changer ART, he made ART!! Before to know about him, i was always asking myself what did Picasso to be so famous, and what he did to change Art history???

Now, i know, he was someone really bad, he was lazy, but he was an artist, a real one. He learned a little from everybody, he took the best and he was so smart that when he (reunir) what he learned from Matisse, Rousseau, Cezanne, African Art.. it was his Art, Picasso's Art, and it was better than Rousseau, Matisse..

He can have nothing and made something.
People always think that Picasso was a perfect man, he knew how to paint... but the truth, Picasso learned how to learn, and he make himself his own Art..

Picasso stay and will stay forever for us the biggest artist ever because he knew how to answer every moment of his life..

(How he would know that someone like me, will be so fascined by his art...)